As Emily and I continue our life stories, pursuing adventures and widening our perspectives through the blessings of travel, it becomes inevitable that we will occasionally experience the “down-side” of otherwise great experiences. It’s kinda like having a great big bowl of Southern pinto-beans with some good ole chow-chow and some hot buttered cornbread – Newton’s third law (every action has an equal-opposite reaction) will forever be relevant.

When you think of Amsterdam, your mind can’t help but to conjure up certain well-known images. Usually, it’s the canals lined by 17th century row houses or perhaps it’s the colorful tulip fields, big chunky windmills, unruly Vikings with tangled hair, or maybe its of famous artists such as Van Gogh and Rembrandt. Of late, we might be more interested in what they do or smoke in the “red light district”.

What about your first instincts of Amsterdam? Have warm and fuzzy thoughts of millions and millions of bicycles ever been your first instinct? If so, you’re an asshole and you really need to grow the hell up and buy a car. Uhm, just kidding…ok, well, no I’m not.

Do you remember being a kid and laughing your guts out when your best friend wrecked his bicycle in the most insane way? I’m no longer ashamed to admit it because I now know that I’m not the only insensitive bastard out there who laughs out loud at other people’s crashes. The Germans, imagine this, actually invented a special word for the act of deriving pleasure from the misfortune of others – schadenfreude! The gal or guy who invented that word probably spent time vacationing in Amsterdam.

Pretty much everyone in the whole world hates bicyclists. If, however, you’re reading this blog from a distant planet who’s government already sterilized all of your fellow beings who were into bicycle riding a millennia ago, and you cannot comprehend the emotions shared by beings on your sister planet, just imagine on Christmas Day giving your precocious 6 year old son a real police badge, an assault rifle, three loaded magazines, a police car and a full tank of gasoline. The child you once thought you loved would do some pretty awful things right? Well that same child, after leaving prison, now has exactly what it takes to be a great cyclist. Just sayin.

A typical daily conversation in Amsterdam:

Tourist in Amsterdam: “Jesus freakin Christ! This 25 foot wide sidewalk is super nice but these asshole cycling sadists run me down every time I try to walk on it!“

Tourist in Amsterdam: “Screw you, Dutch asshole, I’m a f***ing American. We invented oxygen and you’re using way more of it than I’m comfortable with at the moment; plus, the word is actually TOURIST, not TSEUURIST! We probably invented that too. 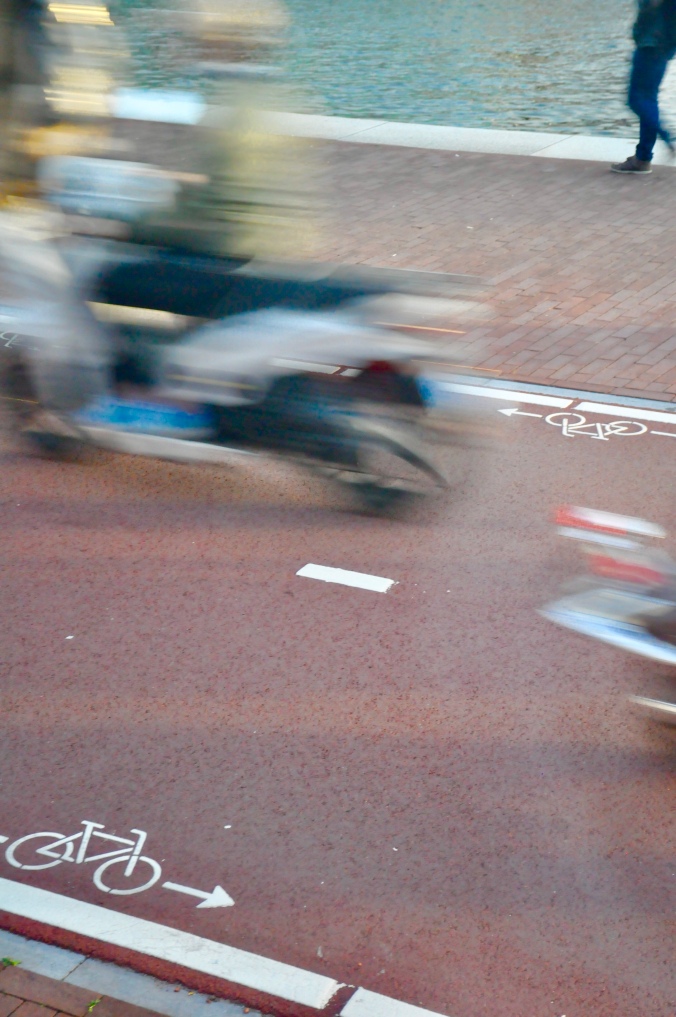 It all makes complete sense when you factor in the enormous amount of marijuana being smoked in this city. Hell, even if you don’t smoke weed, you can get completely stoned out of your mind just by walking around town…any part of the city, not just the red light district. And if you’re riding a bike at 15 mph, it’s much like a continuous “shotgun”. But, trust me, those evil-doers on two wheels are definitely doing some shady stuff.

No shit, bicycles in Amsterdam are killing people and the world is asleep! Where’s Pol Pot when you really need him? Dutch sources report that in 2017, fatalities from bicycles exceeded those from cars. Yet the Dutch government seems to be doing everything they can to make things worse. They’ve built more than 500 kilometers of bike paths in the city – the most in the world.

What else? The city charges cars 5 Euros per hour to park a car while bikes litter up every bridge, canal bank, tree row, and front porch at no cost. They’re not using fuel so who’s paying for those miles and miles of red colored bicycle super highways – yeup, you guessed it. The car drivers are paying almost $7 bucks a gallon for gas, I’m guessing the sole source of funding for yet more and more miles of those fancy paved red carpets for this entitled group of serial killers on wheels.

Who do they think is gonna keep up those systems when they finally exterminate the last car driver and frighten off the last pedestrian? Seriously, this place literally has these things called “parking flats” which are essentially parking garages for bicycles which can hold between 2500 and 6000 bicycles. Used by commuters who might take the train into the city for work then grab their two-wheeled death machine from the “bike flat” then ride the extra distance to work. Bikes are a big deal in this place. 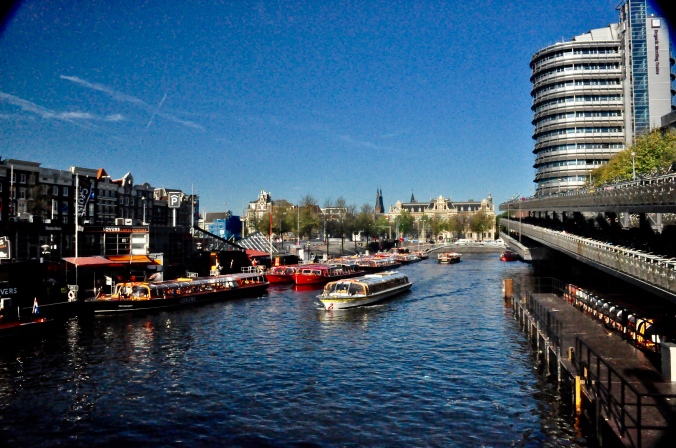 If you run a traffic signal, by car, in Amsterdam, the ticket cost is $240 euros. That’s a lotta jack. Are there traffic signals for the dreaded bicycles? Nope! How much sense does it make to replace hundreds of thousands of law-abiding car owners with an equal number of outlaw bicycle villains whom, as a group, have no intention to share those fancy red carpets with anyone else and who’re not contributing a single red cent financially to the machine that makes the whole damn thing work?

This place is so crazy over bicycles, they actually created a “bicycle Mayor” specifically to liaise with cycle groups. Yes, they actually have professional “bicycling” groups. The Nazis were looking for something to do after the big war so it seemed a natural fit. They just changed their names to fit in – Hans Hess could instantly become known as Venom Dingersloot and suddenly he can rule the entire world – only this time people are taking him seriously.

The “Mayor of Mayhem”, I’ll call her, decided that Amsterdam needed even more bike lanes and paths and that they should all be covered with roofs so riders outfits don’t get wet while cycling in the rain. Blood is fine; it’s the rain that sucks. Yeup!

Also reported was the fact that cars get 44% of available public parking space while bikes, used for more than 60% of local journeys, get only 11% of the available parking space. Seems horrific doesn’t it? I wonder how much larger in size, percentage wise, a car is over a bicycle? Would it matter?

We’re told that bicycles outnumber people in Amsterdam by 1.2 million. Literally, you stand at the edge of the red bike-lane for 10 minutes waiting for a quick opportunity to cross; the bikes number in the dozens coming from both directions – never stopping, seamlessly never ending, and certainly never slowing down or attempting anything mimicking courteousness.

Last year the city of Amsterdam recovered over 5000 bicycles from just one canal they were dredging. After cleaning them up and reconditioning them, the city of Amsterdam donated them to a 3rd world country. I’m trying hard to find out which country got them so I can avoid it in our future travels.

Amsterdam is often held up by public transport advocates as a modern, progressive city that accommodates cars, trams, canal boats, cyclists and pedestrians with ease but the image is at odds with reality. What is obvious from all this? When you allow one particular public interest group to dominate anything…anything at all, it will feed and grow itself at the expense of every other group. Schadenfreude…I’m really liking this word!